Fantasy football waiver wire recommendations refer to 12-team league formats, unless specifically stated. FAAB $ amounts are based on a $100 budget.

UPDATED — 1) RB Elijah Mitchell, San Francisco 49ers: After rookie Trey Sermon was inactive and starter Raheem Mostert left early with a knee injury, Mitchell’s debut couldn’t have gone much better. He rushed 19 times for 104 yards, including a 38-yard score. While pass pro was a liability, as can be expected, he is a must-own in an offense that lives for pounding the rock. Mostert will miss the rest of 2021 after opting for surgery. Mitchell will be tough to bid on … it’s early, so people will not be afraid to drop huge numbers on him, even in the face of uncertainty if will we see Sermon get heavily involved now.

2) WR Zach Pascal, Indianapolis Colts: A pair of touchdowns grab one’s attention, although Pascal’s role should be just as important. He’s the No. 2 receiver with T.Y. Hilton (neck) out indefinitely. Michael Pittman Jr. may not be ready for the top cornerbacks this league will throw at him, and Pascal stands to benefit from it. There will be clunkers along the way, so be optimistically guarded when rostering him. He led all actual wideouts on the team with five targets (4-43-2).

3) WR Christian Kirk, Arizona Cardinals: Basically a forgotten man in fantasy drafts, Kirk proved he doesn’t yet have a fork protruding from his back. The free-agent addition of WR A.J. Green (6 targets) proved fruitless one week into the experiment, and it was the fourth-year Kirk who thrived in the opener (5-70-2, 5 targets). It won’t be like that every week, and Kirk comes with durability concerns over the long haul, but gamers should play him with tasty matchups ahead vs. Minnesota (Week 2), Jacksonville (Week 3), and San Francisco (Week 5). Someone in your league may overspend.

4) QB Jameis Winston, New Orleans Saints: Looking poised and in command of the offense, the former Tampa Bay starter was efficient in his dismantling of the Green Bay Packers in Week 1. Winston toss five touchdowns and missed only six throws on his 20 attempts. Given such low volume, it’s tough to discern his favorite target at this point. It seemed as though Marquez Callaway was on track to be that guy, but a date with Packers CB Jaire Alexander forced Winston to target him just twice (1-14-0). The turnover-prone quarterback leaned on tight end Adam Trautman (6 targets) and Alvin Kamara (4). Touchdown grabs from the likes of WR Chris Hogan, TE Juwan Johnson and WR Deonte Harris highlight Sean Payton’s ability to get blood out of a rock. Winston is a matchup play for now (tough schedule) but belongs on all rosters.

5) WR Sterling Shepard, New York Giants: It is kind of surprising Shepard isn’t more universally owned after having a strong camp. We’ll blame it on the Daniel Jones effect. It didn’t detract from the veteran receiver in Week 1 as he saw a game-high nine targets, generating 113 yards and a score on seven grabs. Working in Shepard’s favor: He is a proven producer playing for a team with major question marks around him in the passing game. For as lame as it may sound, this is all about a good opportunity on a bad team.

6) WR Jalen Reagor, Philadelphia Eagles: An unmemorable rookie season can be put behind him after a 6-49-1 line to open 2021. The Eagles still have some question marks on defense, which will create added passing opportunities. More importantly, quarterback Jalen Hurts fits the new offense and creates plays. The upcoming two weeks feature matchups with San Francisco — a defense in big trouble on the back end — and Dallas in Week 3.

7) RB Mark Ingram, Houston Texans: Simply put, any running back with this pedigree and rushing 26 times to dominate his backfield’s touch split belongs on a roster. Ingram struggled (3.3 YPC) his way to 85 yards and a touchdown behind a shoddy offensive line and vs. a feeble defense, so don’t get overly excited. The workload says more about Phillip Lindsay (9 utilizations) and David Johnson (7 utilizations) than it may about Ingram.

8) RB Carlos Hyde, Jacksonville Jaguars: Last year’s rookie darling, James Robinson’s relationship with the new regime has to be in doubt. They tried to replace him with first-rounder Travis Etienne, whose season ended with an injury before it began. When it seemed like Robinson was ready to pick up where he left off in Week 1 with a strong matchup, he carried the ball only five times and added just three catches in a game lost nearly from the onset. Hyde, a former Ohio State back under Jags head coach Urban Meyer, paced the backfield with nine carries and 11 touches. While we don’t see this as a full role swap, alarm bells should be a ringing.

9) Arizona Cardinals defense: A trio of takeaways and six sacks vs. Tennessee, highlighted by five belong all to Chandler Jones … yikes. In the next two weeks, Arizona faces Minnesota and Jacksonville — both teams with offensive line questions. While there is definitely reason to be skeptical about the cornerbacks on this defense, a fierce pass rush hides plenty of deficiencies.

10) WR Nelson Agholor, New England Patriots: He was utilized properly, something the Las Vegas Raiders understood last year that Philadelphia didn’t seem to ever truly figure out. Rookie quarterback Mac Jones looks like the real deal in the smallest of sample sizes, and Agholor’s seven targets checked in second among Patriots wide receivers. Look at the veteran receiver for roster depth.

QB Jared Goff, Detroit Lions at Green Bay Packers: Poor defenses give up points, and giving up points leads to come-from-behind football … #No$#*!Sherlock. There aren’t too many times with a full set of slate in which Goff is an advisable play, but after we saw a blueprint from New Orleans as to how a team should attack, be sure former Saints assistant and current Lions head coach Dan Campbell took notice. An angry Green Bay offense should create plenty of garbage time, if nothing else.

Seattle Seahawks defense vs. Tennessee Titans: Can we expect Tennessee to give up six sacks and turn it over three times again? Of course not, but that doesn’t mean this offensive line — specifically a rusty Taylor Lewan — will get all of its ills cured early on. Seattle recorded three sacks and a takeaway vs. a talented but banged-up Colts line in Week 1. There could be hope here after the ‘Hawks played relatively well in the secondary.

New York Giants defense at Washington Football Team: No Ryan Fitzpatrick (hip) leaves Taylor Heinicke as the starter after he replaced the 38-year-old in Week 1. New York had a tough defensive matchup vs. Denver in the opener, facing a quarterback known for his cautious, protective ways. The Giants have a quality secondary and can focus on stopping the running game, which may lead to a low-scoring affair for those in leagues that reward such a feat. Expect a few sacks and up to two takeaways on the measured side of being optimistic.

PK Daniel Carlson, Las Vegas Raiders at Pittsburgh Steelers: A year after tying for the most fantasy points at his position, Carlson became a forgotten man among gamers. He hardly was drafted and has the duties of booting for an offense that should be only marginally better at finding the end zone. Pittsburgh allowed three field goal attempts (all made) and a PAT vs. Buffalo in the opener.

UPDATE — WR Tim Patrick, Denver Broncos: I initially omitted him because of his typical area of operation on the field is being occupied by Courtland Sutton and Noah Fant. Upon some reflection, it was a mistake, and he should be addressed in deeper leagues. We’ve seen Patrick flash a time or two, and now that Jerry Jeudy (ankle) is on short-term IR, he’ll get more chances after a four-catch, 39-yard, 1-TD game. In a pinch, he could even make a lineup this week vs. Jacksonville.

WR Trent Sherfield, San Francisco 49ers: Playing in 49 percent of the team’s offensive snaps in Week 1, Sherfield found the end zone and wound up posting a normally forgettable two catches for 23 yards on three looks. The importance here is two-fold: Brandon Aiyuk wasn’t targeted at all in this game, and his head coach didn’t seem too excited to get the second-year wideout onto the field. Aiyuk played 47 percent of the snaps as Deebo Samuel took over the game. The playing time situation certainly could be a blip — or even the product of something internally the public isn’t privy to just yet — so just be aware this situation may morph in the coming days and weeks.

UPDATED — RB JaMycal Hasty, San Francisco 49ers: Fantasy owners 0, Kyle Shanahan 2. Mostert’s season-ending injury paves the way for one of the reserve backs to see a few touches each week. Hasty (1-3-1 rushing, 1-15-0 receiving) was the next man up with Sermon inactive in Week 1. Head coach Kyle Shanahan said in the most vague of coach speak that Sermon simply wasn’t even the team’s third-best running back entering Week 1, contrary to media reports all summer. Neither player is likely to see huge volume spelling a productive Mitchell. This is a fluid situation, so stay light on your fantasy feet here.

RB Keith Gainwell, Philadelphia Eagles: The rookie saw 12 plays come his way, producing 43 total yards (2-6-0 receiving) and a rushing touchdown. The backfield runs through Miles Sanders, and the matchup was vs. a cake defense, so don’t get too carried away with expectations. Gainwell is depth and injury insurance with the occasional matchup utility.

TE Juwan Johnson, New Orleans Saints: Two touchdowns is bound to get him noticed, but there’s that whole three targets thing, which is difficult to ignore. Johnson, a second-year player and former collegiate wide receiver, wasn’t even the most utilized player at his position on this team, so be cautious when looking to invest. Someone will buy in, however, meaning you’ll likely have to spend more than he is worth to get him. It’s not all skepticism, since he and Jameis Winston had time to build chemistry when TE Adam Trautman was out with an injury late in the summer. If you’re desperate for a possible spark after one game or just want to stash him, Johnson is worthy of a few bucks.

WR Quintez Cephus, Detroit Lions: Garbage time will be a regular theme in the 2021 Detroit season. Cephus flashed a few times in 2020 as a rookie, and then there’s that whole seven targets in Week 1 thing worth noting. He caught only three balls for just 12 yards, salvaging a touchdown in the fourth quarter.

RB Larry Rountree, Los Angeles Chargers: This clearly is Austin Ekeler’s backfield as he out-touched the rookie nearly 2-to-1, but Rountree’s eight handles are worthy of attention. Given Ekeler’s durability concerns, add his primary backup for insurance.

Keep your eye on ’em

WR K.J. Osborn, Minnesota Vikings: Nine targets for a 7-76-0 line shouldn’t be totally written off. Yes, Minnesota was trying to play comeback football, but that might be the case most weeks vs. a competent offense with the way Minny’s defense is playing. As the WR3 on a team without a viable tight end, Osborn could have an erratic but productive role with the right matchup.

TE Pharaoh Brown: Quarterback Tyrod Taylor is known for his management skills and part of that is taking the easy plays. Brown saw five targets, converting four for 67 yards. Keep tabs on what’s next for this tandem. 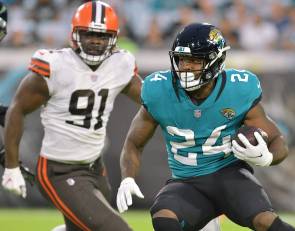 These Week 2 player prop bets are money in the bank!

Latest status of fantasy football weapons who are on the mend entering Week 2.

A snapshot look at the NFL betting lines and odds for Week 2 sports betting and DFS action.

Can you smellellell what this Charger is Cookin’?