Lineup notes: WR Russell Gage (ankle) is out again with an ankle injury.

Lineup notes: QB Tyrod Taylor (hamstring) remains on IR for the foreseeable future. QB Deshaun Watson (personal) reached a mutual decision with team officials and will not play again for the team. WR Danny Amendola (thigh) has been ruled out.

Lineup notes: No injuries of note for fantasy football

Lineup notes: QB Andy Dalton (knee) was downgraded Saturday from questionable to doubtful, and he has been declared inactive, meaning QB Justin Fields will start. WR Darnell Mooney (groin) will be available after earning a questionable tag.

Lineup notes: RB Christian McCaffrey (hamstring) has been ruled out due to his hamstring strain. RB Chuba Hubbard will make his first pro start.

Lineup notes: RB Dalvin Cook (ankle) returned to practice in a limited fashion Friday, but he will give it a go despite a questionable tag.

Lineup notes: WR Sterling Shepard (hamstring) and WR Darius Slayton (hamstring) are both out this week. RB Saquon Barkley (knee) and WR Kenny Golladay (hip) were limited all week but don’t have an injury designation.

Lineup notes: WR A.J. Brown (hamstring) and WR Julio Jones (hamstring) have both been ruled out.

Lineup notes: WR Jamison Crowder (groin) managed a full practice in Friday and will play. OT Mekhi Becton (knee) was placed on IR and will miss several weeks after knee surgery. WR Elijah Moore (concussion) and WR Jeff Smith (concussion) are both out as well. WR Denzel Mims is expected to have a role after being a healthy scratch the past two weeks.

Lineup notes: RB Darrell Henderson (ribs) was limited all week and will play.

Lineup notes: RB Elijah Mitchell (shoulder) will miss one more contest but is getting closer to returning. TE George Kittle (calf) upgraded to limited practice Friday but is also questionable but will play. RB JaMycal Hasty (ankle) remains on IR.

Lineup notes: OT Ronnie Stanley (ankle) is out for Week 4. QB Lamar Jackson (back) is good to go. RB Le’Veon Bell was elevated from the practice squad and should have a sizeable role with RB Ty’Son Williams being a healthy scratch.

Lineup notes: WR Marquez Valdes-Scantling (hamstring) is out for Week 4. RB Aaron Jones (ankle) was limited all week, but he’s off the injury report. WR Equanimeous St. Brown was elevated from the practice squad.

Lineup notes: WR Antonio Brown (illness) came off the COVID list and is ready to go. RB Giovani Bernard (knee) has been ruled out. TE Rob Gronkowski (ribs) was listed as doubtful prior to being downgraded to out. WR Chris Godwin (thumb) practiced fully Friday and will play. WR Scott Miller (toe) was placed on IR with turf toe.

Lineup notes: RB James White (hip) will miss the rest of the season.

Lineup notes: RB Josh Jacobs (ankle) was limited all week and is questionable. He’s probably on the outside looking in for Monday night. 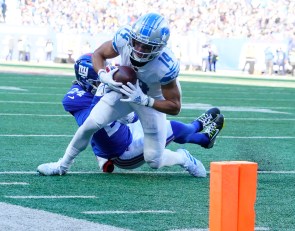