David Montgomery, Joe Mixon  and DJ Chark were the biggest names from Week 3. But when your kicker (Robbie Gould) gets hurt before scoring a point, you know it’s probably not your lucky day.

QB Jimmy Garoppolo (SF) – He injured his calf and said that he “anticipates being out a couple of weeks.” That would put Trey Lance under center for this week in Arizona. The 49ers have their bye in Week 6 to help Garoppolo heal, but if he remains out, they play the Colts and at the Bears the following two weeks. He’d be an option as a starting fantasy quarterback since he played for one half and threw for 157 yards and two scores on the Seahawks, plus rushed for 41 yards in just 30 minutes of play.

QB Teddy Bridgewater (DEN) – Hit by a linebacker helmet-to-helmet, Bridgewater was ruled out with a possible concussion. Drew Lock played in the second half of the loss to the Ravens and passed for 113 yards and one interception. It’s a downgrade for the offense if Bridgewater remains out and they play in Pittsburgh in Week 5, so Lock doesn’t hold much interest even if he ends up starting next Sunday.

RB Joe Mixon (CIN) – Though not initially reported, Mixon suffered what was termed at a “low-grade ankle sprain” in the win over the Jaguars and is considered to be week-to-week. Samaje Perine will take his place and their next two opponents are the Packers and Lions.

RB David Montgomery (CHI) – Laid on the field for a while as they looked at his knee, but he walked off to the locker room. He was in much pain when it happened, but it is believed to be a hyperextension and didn’t tear any ligaments. If an MRI bears that out, he may not miss much time. The Bears play in Las Vegas this week and will need Montgomery. Damien Williams will take his place for however long it is needed. Williams ran for 55 yards and a score on eight carries in the win over the Lions. He’s worth grabbing if the Montgomery owner left him on the waiver wire.

RB Tony Jones Jr. (NO) – The Saints No. 2 running back injured his ankle in the loss to Washington and was carted from the field. Jones appeared to think it was severe when he left the field but his status will be better known on Monday. Dwayne Washington is the only other running back on the current roster, and there are none on the practice squad though Ty Montgomery was originally a running back and typically gets a rush or two per game. There isn’t much fantasy value in the No. 2 back since Latavius Murray left, but there is always the chance that Alvin Kamara could get injured.

WR DJ Chark  (JAC) – A broken ankle shakes up the Jaguars’ receivers while Trevor Lawrence goes through the learning curve for a rookie quarterback. Laviska Shenault is the one most likely to benefit. He and Marvin Jones are the new starters, but the No. 3 role is likely a combination of Tyron Johnson, Jamal Agnew, and Tavon Austin. Shenault was dropped in some leagues but needs to be on fantasy rosters.

TE Logan Thomas (WAS)  – Left with a hamstring injury and threw his helmet at the bench after he hobbled off the field. There’s no word yet on the severity, but Ricky-Seals Jones would replace him again if needed this week when the Saints visit.

Free Agents, Flops and Other Notables

Week 6 byes are almost here – The Falcons, Saints, Jets, and 49ers have a Week 6 bye, so get ahead of the game and review your rosters in preparation.  Week 7 is even worse with the Bills, Cowboys, Jaguars, Chargers, Vikings, and Steelers. Week 7 will touch likely every fantasy team. Look ahead to see if you need to swap out any kickers or team defenses.

TE C.J. Uzomah (CIN) – He only totaled four catches for 39 yards over the first three weeks, but Uzomah came to life against the Jaguars when he caught five passes for 95 yards and both passing scores for the Bengals. It’s just an aberration for now, but he helped out in Week 4 when Tee Higgins was inactive.

WR Curtis Samuel (WAS) – His debut was only four catches for 19 yards, but he’ll become a bigger part of the offense.

RB/WR Cordarrelle Patterson (ATL) – He’s 30 years old and on his fifth NFL team. But he just scored three touchdowns while catching five passes for 82 yards, plus he also led the backfield with six runs for 34 yards. Patterson’s five touchdowns in the last two weeks are more than he scored in any of the eight past seasons. He is 6-4 and 205 pounds and not built like any other running back. He faces the visiting Jets this week and it doesn’t have to make sense why he suddenly is posting fantasy points.

TE Dawson Knox (BUF) – He not only scored twice on his five catches for 37 yards in the win over the Texans, he also turned in touchdowns in each of the last three games. That ties him with  Rob Gronkowski for the scoring lead among NFL tight ends.

QB Justin Fields (CHI) – What a difference a week makes. The rookie threw for 209 yards and just one interception in the win over the Lions. He still only rushed for nine yards on three runs. So, it is odd that they cannot make use of his skills as a runner. On the plus, Darnell Mooney (5-125) finally showed up with Fields under center though his 64-yard catch helped significantly.

RB Dalvin Cook (MIN) – Took the start after missing Week 3 with an ankle injury. But he only ran nine times for 34 yards while Alexander Mattison gained 20 yards on ten rushes. There’s speculation that Cook aggravated the ankle as he played little in the second half.

QB Sam Darnell (NYJ) – He passed for 301 yards and two scores in Dallas, plus ran six times for 35 yards and two more touchdowns.  He currently ranks as the No. 5 fantasy quarterback after four games. That’s not exactly a ringing endorsement for the Jets where he struggled for three years.

RB Saquon Barkley (NYG) – Now that’s the Barkley we remember. The Giants upset the Saints in New Orleans partly thanks to Saquon rushing for 52 yards and a score on 13 carries, plus catching five passes for 74 yards and another touchdown. He handled all but one touch for the backfield and finally looked back to form.

Giants Wide Receivers – Maybe the Saints got caught in a trap game. The Giants were without Sterling Shepard and Darius Slayton and facing the Saints secondary. But Daniel Jones threw for 402 yards and two scores. The rookie Kadarius Toney (6-78) had a breakout effort, and John Ross (3-77, TD) debuted after missing time with a hamstring injury. Whether that was a trap game or not, the Giants head to Dallas this week, where the points tend to skew higher. It will all be worth tracking to see if Shepard and Slayton return from their respective hamstring issues.

RB Alvin Kamara (NO) – He ran for a season-high 120 yards on 26 carries as the Saints tried unsuccessfully to eat up the clock.  But Taysom Hill ran in the two rushing touchdowns, and odder still was that Kamara never had a catch. He never had a pass thrown to him. Last year, he had one game where he was thrown one pass and it was incomplete. But this week appears to be the first-ever game that he was never thrown a pass.

RB Jeremy McNichols (TEN) – The Titans were without Julio Jones and A.J. Brown in the loss to the Jets. Chester Rogers (5-63) and Josh Reynolds (6-59) were their replacements, along with Nick Westbrook-Ikhine (3-29). But Ryan Tannehill threw a team-high twelve passes to No. 2 running back Jeremy McNichols, who led the team with eight receptions for 74 yards. Worth noting for a cheaper Daily Fantasy play next week in Jacksonville if Jones and Brown remain out.

RB Michael Carter (NYJ) – The rookie now takes a much bigger slice of the backfield pie. In the win over the Jets, he ran 13 times for 38 yards and the first Jets’ rushing touchdown of the year. Tevin Coleman (4-14) and Ty Johnson (3-1) played lesser roles though all caught one or two short passes.

Eagles backfield – Miles Sanders disappointed (again) with a role that shrinks since the season opener when he ran 15 times for 74 yards and caught four passes for 39 yards. Sanders was limited to just two runs and three catches in Week 3, then seven carries for 13 yards in the loss to the Chiefs that added three catches for 34 yards. However, Kenneth Gainwell gets better. He ran three times for 31 yards and a touchdown on Sunday and caught six passes for 58 yards. He plays more in passing situations, but the Eagles’ next three opponents are the Panthers, Buccaneers, and Raiders. This bode worse for Sanders and better for Gainwell.

TE Maxx Williams (ARI) – He posted seven receptions for 94 yards in Week 2 but then only three catches for 19 yards in Week 3. Versus the Rams, he caught five passes for 66 yards and a touchdown. The problem with that is Kyler Murray playing so well is that he takes what the defense  gives, and that changes every game. Christian Kirk went from 104 yards on seven catches in Week 3 to only one catch for five yards versus the Rams. DeAndre Hopkins and Murray are the only constants, but players like Williams occasionally show up in box scores.

RB Alex Collins (SEA) – The 49ers knew to bottle up Chris Carson and held him to only 30 yards on 13 carries and a one-yard catch. But Alex Collins replaced Rashaad Penny, who is on injured reserve, as the No. 2 back. And he provided a spark that helped lift the Seahawks to a win in San Francisco. Collins gained 44 yards and a touchdown on ten rushes and turned two catches into 34 yards. He was everything that fantasy owners wanted from Carson. He’s a must-own for the Carson owner now and showed that he could produce when given a chance. The depth chart remains unchanged, but Collins spawned more confidence about using him.

RB Trey Sermon (SF) – There is a good chance that Elijah Mitchell may return this week for the matchup in Arizona. It will likely be disappointing to see what happens to the backfield rotation. Sermon ran 19 times for 89 yards but had no role as a receiver in the loss to the Seahawks.  He was given all but two carries for the backfield and ran well. When Mitchell returns, he may assume a role as a receiver even though fullback Kyle Juszczyk already was the No. 2 receiver with four catches for 41 yards on Sunday. A tangled mess is looming.

WR Randall Cobb (GB) – Marquez Valdes-Scantling was placed on injured reserve last week, and that only made the prospect even worse of what happens when Davante Adams is somehow actually covered?  For at least one week, the answer is Randall Cobb. He was held with no catches in San Francisco during Week 3, but he led the Packers with five receptions for 69 yards and two touchdowns in the win over the Steelers. The next two weeks are on the road to the Bengals and Bears, so the Packers will need someone besides Adams to step up.

Tyreek Hill  –  After two weeks of very moderate stats and no scoring, the Chiefs’ star wideout dominated the overmatched Eagles’ secondary when he caught 11 passes for 186 yards and three touchdowns. Travis Kelce (4-23) may have had an off day, but Hill was unstoppable. 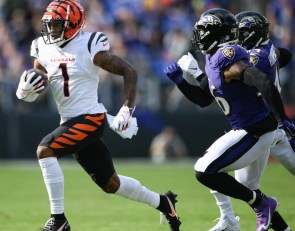 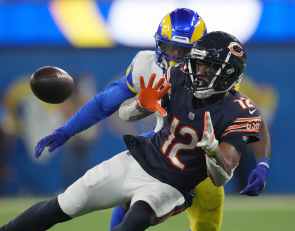 Can a cakewalk schedule make Jameis “Fantasy Famous” once again?