Fantasy football waiver wire recommendations refer to 12-team league formats, unless specifically stated. FAAB $ amounts are based on a $100 budget.

1) D’Ernest Johnson, Cleveland Browns: No Nick Chubb (calf) in Week 6 left Kareem Hunt as the feature back, and the veteran’s day came to a premature end as he was carted off with a calf injury of his own. While it doesn’t sound season-ending in nature, Hunt will miss a few weeks and has been placed on the Reserve/Injured list. Update: Chubb has been ruled out for Week 7. Johnson is closer to a prototypical NFL back for this smashmouth offensive system, whereas RB/WR Demetric Felton (more below) is cut from the change-up, pass-catching cloth. Cleveland was without both of its starting tackles in Week 6, which will warrant some attention before playing Johnson on this short week of rest. Ahead for Cleveland: Denver, Pittsburgh, at Cincinnati and at New England. One or both of the Chubb-Hunt duo should be back by the end of that stretch.

2) QB Jameis Winston, New Orleans Saints: Reiterating from last week … It’s easy to get hung up on his Week 5 performance that was highlighted by four touchdown strikes, but it’s not easy to also forget the prior three games of utter mediocrity. The Saints return from a Week 6 bye and are eligible to get injured WRs Michael Thomas and Tre’Quan Smith back in Week 7, although reports say Thomas is more like a week or two away. Update: Smith was designated for return but isn’t a lock yet to play. Looking at the schedule, the former Tampa Bay quarterback will have a legitimate month’s worth of lineup utility. The Weeks 7-10 slate serves up the exploitable defenses of Seattle, Tampa, Atlanta and Tennessee before the schedule stiffens again.

3) RB Khalil Herbert, Chicago Bears: A reminder from last week’s inclusion, in case your entire league passed on the rookie: Herbert remains available in 35 percent of leagues polled. Damien Williams missed Week 6 on the COVID list, but Herbert saw more attempts in Week 5 when both were on the field throughout the contest. Given the strength of Herbert’s Week 6 showing (19.2 PPR), expect him to see the lion’s share (bear’s share?) of the reps. The downside: a murderer’s row of running back defenses ahead of the Week 10 bye with matchups at Tampa, vs. San Fran, and at Pittsburgh. Chances are high someone in your league won’t think about the schedule and will overbid based on Herbert’s recent results.

4) RB Rhamondre Stevenson, New England Patriots: It has been a tumultuous ride for the rookie as he was a preseason darling and then found himself in the doghouse after an early-season fumble. Damien Harris entered with injured ribs but managed to rush 18 times for 101 yards and a score vs. Dallas. The Pats turned to Stevenson on the goal line for a short TD on one of his five rushes. A three-target, three-catch, 39-yard showing is more intriguing, especially as 31-year-old Brandon Bolden had one target and a lone rushing attempt in Week 6. Ahead on the schedule for the Patriots: NYJ, @LAC, @CAR, CLE, @ATL, TEN and @BUF before a Week 14 bye. It may be tricky knowing when to play Stevenson. We have the benefit of a heavy dose of bye teams this week, and the Jets coming to New England is a fine time to give it a go.

5) TE Ricky Seals-Jones, Washington Football Team: A week after being included here as a one-week play for the strength of the matchup and a legitimate role, RSJ deserves to be put on rosters for the near future. He could be useful for the next few weeks while Logan Thomas is out, and the tight end position has been as volatile as ever of late. The upcoming two weeks send Washington on the road to Green Bay and Denver — trust him vs. the Packers before reevaluating his utility against Denver as Thomas nears his return.

6) RB Le’Veon Bell, Baltimore Ravens: Latavius Murray scored a TD in Week 6 — as did both Bell and running back Devonta Freeman — before an ankle injury cut short the former Saint and Raider rusher’s day. While we don’t know the severity of Murray’s injury just yet, there’s value to speculatively adding Bell (and even Freeman). Baltimore faces Cincinnati in Week 7 before going on bye, making Bell a so-so rental with potential staying power should he show out.

7) PK Younghoe Koo, Atlanta Falcons: Check for the talented kicker on the wire after his Week 6 bye likely cast him free from the clutches of your opponents. While he hasn’t been as strong of a performer as in 2020, Koo has a great chance of turning things around as Atlanta gains comfort in head coach Arthur Smith’s system and a mess of absent players return to the field.

WR Quez Watkins, Philadelphia Eagles at Las Vegas Raiders: Purely a flier for a cheap touchdown during “Bye-mageddon” Week 7. The Raiders have given up the third-fewest fantasy points to WRs, but both Courtland Sutton and Tim Patrick scored TDs and went for double-digit PPR points last week. Vegas will once again be without CBs Damon Arnette and Trayvon Mullen. As the Raiders focus on slowing impressive rookie receiver DeVonta Smith, Watkins will see isolated coverage and has a plus-chance of breaking free against an injury-ravaged secondary. Keep in mind, though, this is an all-or-nothing type of lineup commitment.

TE Zach Ertz, Arizona Cardinals vs. Houston Texans: Ertz appeared in this spot last week and delivered on Thursday night, only to be traded to the Cardinals the next day. The former Philadelphia stud still has some juice left in the tank, and while he doesn’t have as high of a ceiling these days, Houston offers one of the softest matchups for the position in Ertz’s first game in the desert. No team has allowed more points in PPR, and it’s an excellent matchup in standard scoring, too, as the Texans have yielded the five scores over 36 receptions faced. It’s a risky recommendation due to the newness of his tenure in Arizona, but the matchup is prime.

RB Chris Evans/Samaje Perine, Cincinnati Bengals at Baltimore Ravens: This recommendation comes with the caveat of Perine (COVID-19) could be back this week, and, if he is, substitute him for Evans. The sole purpose of playing either back is for a touchdown flier — Baltimore has yielded seven offensive scores (1 receiving) to the position at a top-10 rate of once every 20.5 touches. Whichever back is slated to be Joe Mixon’s direct backup is worthy of a desperation play in a pinch with six teams on bye.

TE Cole Kmet, Chicago Bears at Tampa Bay Buccaneers: We saw signs of life from the second-year pro in Week 6 as he landed four of five looks for 49 yards. In the prior month of action, Kmet totaled five receptions for 39 yards. Justin Fields is slowly starting to settle in a little more as an NFL starting quarterback, and this week brings a trip the Tampa Bay — a defense that has granted tight ends a score every 10 grabs in 2021. Only two teams have permitted more receptions to the position, and an average of one TE per week has posted 10 or more PPR points against the Bucs. Kmet is a super risky play, but there’s ample upside.

PK Graham Gano, New York Giants vs. Carolina Panthers: Gano has averaged 2.8 field goal attempts in the past five games, connecting on 12 of the 14 tries. He has made all five of his PATs. The offensively battered Giants may have just enough fight in them to put the veteran into range enough to matter. Seven of the nine total field goals attempted vs. the Panthers have come in the last two outings, possibly an indication of a developing trend.

New England Patriots D/ST vs New York Jets: New England’s neutrally ranked fantasy defense (16th) still manages to carry name recognition, which likely has them rostered in more casual formats than advanced, but it’s worth inspecting the wire for its presence. Other than the Week 2 trip to the Jets, when the Patriots created four turnovers and posted as many sacks, this defense has not come even close to matching that output. It has four total takeaways and nine sacks otherwise. Some of it is matchup-related, but this isn’t your older sibling’s Pats defense … that is, unless it is facing a rookie quarterback not named Davis Mills. Go back to this well once more vs. Zach Wilson and crew.

Carolina Panthers D/ST at New York Giants: The 18th-ranked Carolina fantasy defense is floating about on nearly half the wires polled, and it’s no wonder why after this group has two or fewer points in a pair of the last three contests. The Giants have allowed defenses to score 8.0 fantasy points in each of the past two weeks as injuries have decimated this offense. That number of points just happens to match the high point of Carolina’s defensive capabilities seen thus far in 2021, so understand there’s a fair amount of risk associated here.

RB Jeff Wilson Jr., San Francisco 49ers: Wilson is eligible to return this week after being placed on the Physically Unable to Perform list following offseason knee surgery. The lack of interest in utilizing Trey Sermon (two plays) in Week 5 before San Fran’s bye is telling, and Wilson has been a coach Kyle Shanahan favorite. Roster him and wait to see what kind of role he has upon returning, but it’s likely to be notable in the red zone, even if Elijah Mitchell dominates touches between the 20s.

UPDATED — RBs Rashaad Penny & Travis Homer, Seattle Seahawks: With Chris Carson (neck) now on IR for at least three games, and Alex Collins (hip, glute) uncertain for this week, it looked as though we would see a blend of Travis Homer and DeeJay Dallas having sizeable roles. Now, always-injured RB Rashaad Penny is set to be activated from IR and is “raring to go,” according to Pete Carroll. The downside here — largely why they don’t receive a stronger recommendation — is the matchup with the New Orleans Saints as they return from a bye week. Not only is this a dominant run defense but they’re also well-rested, which spells trouble for first-string backs, let alone third/fourth-teamers. After New Orleans comes Jacksonville before the bye week … none of these backs will likely to have long-term utility. Penny is the better option for a TD, and Homer has more upside in PPR.

Keep your eye on ’em

WR/RB Demetric Felton, Cleveland Browns: As mentioned above, Cleveland’s backfield is an infirmary. Give Felton a look in deep PPR formats if thoroughly desperate for an option during the week with six bye teams. For all other settings, it’s best to keep him in your sights as we await to hear more about Chubb entering Week 7’s Thursday nighter.

The following fantasy-relevant players are eligible to return from the Reserve/Injured list and could be on waivers, but inclusion below doesn’t guarantee coming back in the upcoming week. The date when the player was placed on IR is in parentheses.

If you’re in a competitive league, it is unlikely running backs are just chillin’ on the waiver wire. But that doesn’t mean gamers aren’t still in need of “break in case of emergency” running backs. These players could be available for a dumpster dive: 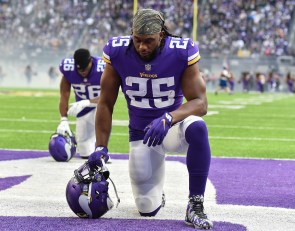 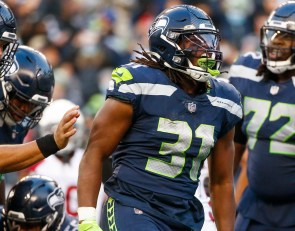 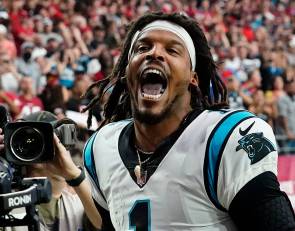 Fantasy football risers and fallers as we enter the penultimate playoff push.

Despite big-name injuries in Week 12, the wire’s talent pool is shallow this late in the year.