Top-ranked daily fantasy sports pro Jason Mezrahi, founder and CEO of WinDailySports.com, breaks down his favorite DFS plays at various salary ranges for Week 9 of the NFL season. We are back for another year of DFS domination and we have some new tools to take advantage of from my team over at WinDailySports.com.
Our projection model, lineup optimizer, and data tools have been revamped and back tested to start the season off right. So what I will do in this article is list some of our highest projected players based off raw points and our highest point-per-dollar plays based on DraftKings.com pricing. Special Huddle Member Discount: If you would like to give our membership at Win Daily a try, take advantage of a FREE 2-week promotion where you will gain an all access gold pass to our DFS package. Use promo code “thehuddle” at checkout for 2 weeks FREE for both our DFS Gold Package. Sign up now.

These are some of the players Jason will be locking in his lineups on DraftKings and FanDuel for this weekend’s slate.

Allen is at the top of the projection model at Win Daily Sports and for good reason. Through seven games, Allen has 1,972 passing yards, 269 rushing yards, and is currently averaging 28.4 DraftKings points per game. Even after a sluggish first half against a stingy Miami Dolphins team, Allen exploded in the second half and put up 29.5 fantasy points when it was all said and done. The only thing that can slow Allen down is a bad opposing offense that struggles to score and keep up. This could be the case here with the Jacksonville Jaguars, so I am not pushing all-in with Allen, but he is a solid start for your cash game builds. There are some strong plays up top this week, and I will have shares of not only Allen but will have Lamar Jackson, Patrick Mahomes, Justin Herbert, Jalen Hurts, and even Taysom Hill, if he draws the start. Allen and the Bills offense are projected to score 31 points in this one and are topping the charts as far as team totals go. My final decision on where to land will come down to lineup construction and value once we hit Sunday morning.

Jackson is running wild and provides a safe floor each week while racking up the rushing yards. He’s on pace for another 1,000-yard rushing season, which is incredible to think about as a quarterback. The rushing upside provides a floor of around 20 points and a ceiling for 40-plus, which is what you want out of your quarterback. The matchup this week versus the Minnesota Vikings is juicy. Minnesota ranks 10th-toughest against opposing quarterbacks and is allowing 367 total yards per game. The Ravens are projected to score 27 points as per Vegas, and the pace should remain high through four quarters. I am not excited to broadcast this, but this is probably the best receiving corps Jackson has had by his side his whole career. Playing Jackson in both cash and tournaments is a solid start to your lineup builds in Week 9.

Continuing the trend of dual-threat fantasy players, we land at Ekeler atop our projections at the running back position. Through seven games, Ekeler has 420 rushing, 302 receiving yards and a total of eight touchdowns. Averaging 22.5 fantasy points per game, he now draws a matchup versus the fourth-worst defense at defending the running back position. Again we are following Vegas, and the 50-point total has me intrigued. The Chargers are favored by only 1.5 points, so we should have a tight game, and any time I have a chance to attack the Philadelphia Eagles defense, I will. Unlike the Detroit Lions last week, this Chargers offense has weapons at every level, which will open up a ton of scoring opportunities for Ekeler in Week 9.

I will be honest … I am a fan of seeing Baker Mayfield and Odell Beckham struggle each week, and I do feel bad for players like Chubb. This offense is in shambles right now, and I think the obvious choice is to rely heavily on Chubb to get things right. After missing two games, Chubb saw the most touches out of the backfield and retained the role of lead back, which will continue this week versus the Cincinnati Bengals. I still don’t know how a team can dismantle the Ravens one week and follow it up with a loss to the New York Jets the next week, but the Bengals prove that on any given Sunday the possibilities are endless. This is a good landing spot for Chubb at his depressed price tag against a Bengals defense that not only got torched by Michael Carter last week but on the season ranks 27th against opposing running backs.

As I was writing up Davante Adams, the news dropped that Aaron Rodgers will be out this week with COVID. This lowers my expectation for Adams and even the Kansas City Chiefs’ passing attack as I expect the total to really drop with the removal of Rodgers. Diggs has been rather quiet this year compared to last year but lands in a great spot this week against Jacksonville. The Jaguars rank 26th against opposing wide receivers and are currently allowing 278 passing yards per game. With only one 100-yard receiving game this year for Diggs, I got a pretty good feeling we will see his second one this week. He is a safe landing spot for both cash games and tournaments and is the proper pairing with Allen in Week 9.

I like Renfrow prior to the unfortunate Henry Ruggs news, but following the news, he becomes the top point-per-dollar wide receiver on the slate. The price is right on Renfrow, who has scored double-digit fantasy points in every game but one and now should get a bump in targets with Ruggs out. The matchup is also a good one versus a Giants secondary currently rank 23rd against opposing wide receivers. The Raiders are projected to score 24.5 points on Sunday, and with not much of a run game, I would safely assume Renfrow should be involved through four quarters. Lock up Renfrow in Week 9 in both cash games and tournaments.

Gesicki has been exactly what you needed from your season-long tight end to start this year. He has been consistently productive and provides stability at a position that can leave you frustrated. He has averaged 13 points per game and has become Tua Tagovailoa’s safety valve over the middle. Gesicki draws a sweet matchup in Week 9 against the Houston Texans, who currently rank 28th against opposing tight ends and are allowing a whopping 401 total yards per game. The targets are there, and the production will follow. If you can’t afford Travis Kelce or Darren Waller, Gesicki is the first name I will roster in Week 9 at the tight end position.

Goedert just happens to be the best and most consistent receiver in the Eagles offense. Since Zach Ertz has been traded, Goedert has had back-to-back 10-plus-point performances. This matchup will be his best opportunity for Goedert to really break out since the departure of Ertz. The Chargers rank 29th against opposing tight ends, and we have a game total of 50. When combining the matchup and the high total in this one, Goedert will be involved heavily through four quarters, and we should see a ceiling game in Week 9.

Good luck in Week 9, and if you ever have any questions, please hit me up on Twitter!

Jason Mezrahi has been a professional, top-ranked Daily Fantasy Player on FanDuel and DraftKings for more than eight years. He has won FanDuel’s $155,555 King of the Diamond competition and placed second in DraftKings’ Fantasy Basketball World Championship, earning him $300,000. He owns and operates WinDailySports.com, which supports the DFS and Sports Betting community with resources such as tools, projection models, expert chat, in-depth written analysis and podcasts, plus much more. 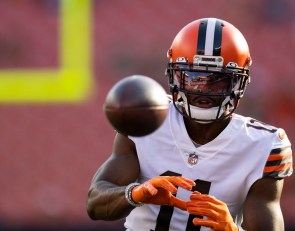