The 2021 season heads into the Championship week, and that means most fantasy teams are left twiddling their thumbs, lamenting how the minefield of NFL injuries was joined by the sniper of COVID-19.  Let’s look ahead at six interesting players.

There will be plenty of changes between now and Week 1 of 2022, but these are the Top-6 players I’m closely tracking since they will be key in the fantasy fortunes of their teams and could find themselves in different situations next year. The list could be 20 or 30 names but I’ve culled them to the most interesting for now. Player movement and coaching changes will further impact the natural evolution of career arcs, so there are always plenty of changes

1.)  RB Travis Etienne (JAC) – Easy to forget the 1.25 pick in the 2021 NFL draft because we never really saw him. The LSU product was the second running back drafted but injured his Lis Franc. Originally, it thought he could return at the end of this season, but the Jags moved him to injured reserve. Etienne returns to a new coaching staff but has no history with the old one. James Robinson Just tore his Achilles tendon, so his status will figure into what Etienne will be given in workload. The expectation was for Etienne to be a pass-catching back with other creative uses while Robinson who shares the rushing. Etienne’s role  depends on what happens with the rest of the team but he was the pick after Najee Harris and before all other rookie running backs.

2.)  WR Michael Thomas (NO) – Thomas is midway through the monster 5-year, $96 million contract of 2019 and he set the NFL record of 149 catches in 2019, as the unstoppable wideout of the year. He then stumbled through 2020 with a bad ankle that limited him to only 40 catches for 438 yards and no scores. 2021 became even worse when he suffered a setback in his rehab. He held off on surgery until June and hasn’t played. He returns to a vastly different team that struggles to pass and shifted over to Taysom Hill as a running quarterback that sometimes throws. There is a chance that he could get traded and would likely be amenable. He was the Offensive Player of the Year in 2019 and is only 27 years old. He should be in his prime but is almost forgotten. His contract has a potential out in 2022.

3.) WR Chris Godwin (TB) – His contract expires this year and is complicated with his torn ACL that just ended his season. The Bucs went all out trying to re-sign players for another shot at a Super Bowl but it would be prohibitively expensive to do that for another year.  Godwin’s injury also happened late in the season so by training camp, he’ll be just eight months out from the injury. Modern medicine gets better every year, so his return could be sooner than expected. But he’ll leave a hole in Tampa Bay if he does go and would force the Buccaneers to save money elsewhere if they brought him back. Tearing his ACL complicates his outlook.

4.) RB Leonard Fournette (TB) – After being instrumental in the playoffs of 2020, he was re-signed for just one year in an attempt to keep the team together for a second Super Bowl. It only took three weeks for Fournette to become the primary back for the Bucs and left scraps for Ronald Jones and Giovani Bernard. Fournette became the primary rusher and added up to eight catches per game. He’s out with a hamstring strain now but may return during  the playoffs. But he’s also a looming free agent that has proven to be worthy of a workhorse role and he is only 26 years old.

5.) RB Melvin Gordon (DEN) – Two seasons with the Broncos were as productive as any he had with the Chargers and he still shared significant carries with Javonte Williams this year. Gordon is a free agent in the offseason and at 28 years old, there’s still at least a year or two of prime time left. But he made $6.9 million this year while Williams is working on a 4-year, $4.4 million contract.  Gordon  could be re-signed which would just mean more of the same. But if he leaves, Williams becomes a hot fantasy prospect and assumedly, Gordon lands on another team where he’ll  detract from another committee member.

6. QB Aaron Rodgers (GB) – The Packers star quarterback was the subject of trade speculation last offseason and recently asked about retirement and said he “wouldn’t rule that out.” There is an optional out in his contract for 2022, so he could be traded, he could stay put, or he could just retire. If Rodgers  retires or goes to a new team, it leaves the Packers in a major rebuilding situation without a Hall of Fame quarterback for the first time in decades. Davante Adams becomes a free agent and could possibly follow Rodgers elsewhere or just cash in and land on a new team. In almost any case, the Packers are looking at a down 2022 if Rodgers – and very likely Adams – are not there next year. 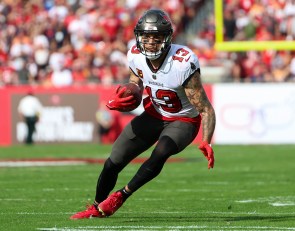