After four seasons of head coach Matt Nagy, the Bears finally turned the page after a 6-11 season. The Bears squeaked into the playoffs as a wildcard with an 8-8 record in 2020, and he was given one more year to turn their franchise around, but it only got worse.

Eberflus hasn’t had any real experience with the offense, but he’s bringing a new team outlook and overall system for the entire roster. He has very high standards and isn’t reticent to release any player he feels is not giving maximum commitment regardless of their name or past success. He’s done as much on all of his defenses and is now applying that to everyone. But he has also been willing to adjust the system to the players at hand and adjust it to fit the players strengths. While Matt Nagy was often accused of misusing players, Eberflus’s philosophy is to maximize the players contribution to both the defense and now offense.

Luke Getsy brings a background of being either a quarterback or receivers coach, or an offensive coordinator. He spent his initial years at six different colleges and ran the offenses for West Virginia Wesleyan (2009), Indiana (2011-2012), and Mississippi State (2018).  Otherwise, he’s remained in Green Bay since 2014 and served as a wide receiver or quarterback coach. The last two years he served as the passing game coordinator and quarterbacks coach.

This will be the first time in the NFL that Luke Getsy has taken complete control of an offense. While that brings mostly unknowns to the scheme, he has spoken much like Eberflus in wanting to design the offense around the talent there – that’s already a departure from the Nagy era.  His initial task to to build the offense around Justin Fields and tailor everything around what he can do. One of the bigger criticisms of Nagy was that he tried to force Fields into adjusting into a pocket-passer and didn’t use his mobility as an asset.

He’s spoken to having an attacking offense and is described as an expert of fundamentals and techniques. This will be his first time calling plays, so his tendencies have yet to be known. But he’s been successful in relating to players and getting the most out of them. He’s been the quarterbacks coach for Aaron Rodgers for the last three years, so he’s dealt with temperamental players that excel on the field.

Getsy was a former college quarterback and his hire was partially about getting Justin Fields into the best situation for success. Getsy is so respected that he interviewed for the Broncos head coach opening and held the interest of several teams to become their offensive coordinator. There is an expectation that he could become a head coach in the next few years.

Getsy also has extensive experience with wide receivers, and that bodes well for the Chicago passing attack. Getsy is only 37 years old and this is his first time directing an entire offense. That leaves mostly speculation as to what his preferences will be with personnel and play calling.

The Bears still do not own a first-round pick since they dealt that away last year to obtain Justin Fields. But the Bears picked up a second-round pick this year in the trade of Khalil Mack to the Chargers. That’s still deep enough that it won’t likely net any instant stars, but two picks in the first 48 overall should net help that applies to 2021.

Justin Fields stands to benefit from playing under OC Luke Getsy. There’s no question that he starts, but optimism that he’ll be better used and more successful under Getsy.

David Montgomery remains the primary back and he enters the final season of his rookie contract. That’s always motivating and the Bears recently released Tarik Cohen, so Montgomery will remain the clear No. 1 back with a chance at a heavy workload. Getsy comes from the Packers, where they prefer a split backfield but he had nothing to do with the rushing game there.  There isn’t anyone on the Bears’ current roster that appears to be any threat to cut into Montgomery’s workload.

The Bears need to  acquire help in the passing game. Allen Robinson is a free agent and the rest of the roster – Darnell Mooney, Marquise Goodwin, Damiere Byrd, and Jakeem Grant – could use more depth. Mooney broke out in his second season with 1,055 yards last year but is only 5-11 and 179 pounds. He may have maxed out at 81 catches and benefitted from Robinson drawing most of the coverage. If Robinson leaves, the Bears’ passing offense needs upgrading.

Cole Kmet impressed in his second season, but the usage of the tight end isn’t certain with the new offense.

The change in coaching alters the scheme and how they will use players. That isn’t certain with both Eberflus and Getsy as first timers in their new roles. It’s reasonable to expect an improvement from Justin Fields who was central in bringing in Getsy and will be the primary focus in developing the new scheme.

Fields should see improvement from his rookie season that saw him finally see use as a runner. His success will be the measuring stick for the new offense.

David Montgomery’s outlook should be roughly the same. He was used more last year, but some of that stemmed from the absence of Tarik Cohen. But they just released Cohen, so Montgomery should remain in line for a similar workhorse role.

The receivers are still a guess. Allen Robinson is expected to leave via free agency and that will leave a gaping hole in the passing game. Diminutive Darnell Mooney broke out last year, and would become the clear No. 1 wideout but may have trouble holding unto his 81-1055-4 stat line from last year when he becomes the main focus of the secondary. Barring the addition of a productive veteran or a promising rookie wideout, Mooney may be the only fantasy-relevant receiver.

Cole Kmet’s value remains unknown, and he’ll once again merit a spot as a fantasy backup until his role is proven to become bigger in the new offense. 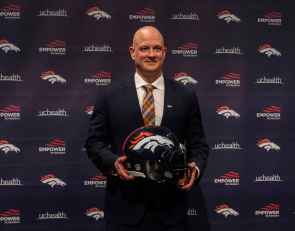