Wide receiver Calvin Austin III is among the most exciting players entering the NFL via the upcoming draft. The Memphis, Tenn., native chose to stay home to play for the Tigers and also starred as a decorated track sprinter.

Austin redshirted in 2018 for Memphis but still appeared in 11 contests. In 2020, he erupted and was named to the All-AAC first-team offense, scoring 11 times through the air in as many games.

Austin saved his best performance for 2021, logging 1,149 yards and eight aerial scores on 74 grabs, adding a 69-yard rushing touchdown on his way to another first-team all-conference selection.

His projected draft placement varies quite a bit, typically ranging from the third to the fifth round. It will be rather surprising if Austin falls into the fifth as at least one team figures to fall in love with his speed and big-play nature in this pass-happy league much earlier.

A comparison often thrown around is Tyreek Hill, and that’s just not fair. Hill is much more powerfully built with a thicker frame and better functional strength. A more apt comp is Marquise Brown. Both are lightning in a bottle but don’t profile as a No. 1 and aren’t terribly hard to game plan against at the next level.

We’ll give a detailed outlook on Austin’s fantasy worth once the diminuative receiver finds an NFL home. He should become a weekly lineup consideration in short order, although Austin’s style of play is inherently inconsistent for fake football deployment. Expect a lot of all-or-nothing outputs, regardless of where he winds up. 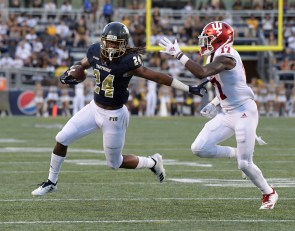