Little more than a curiosity during much of his three-plus seasons with the Miami Dolphins, running back Kenyan Drake truly emerged as a fantasy force after being acquired by the Arizona Cardinals in 2019 when he racked up 814 yards and eight touchdowns in eight games with the club. He followed that up with 1,092 yards and 10 touchdowns in 2020 — while not exactly disappointing, there was a significant per-game drop from 101.8 yards per outing to 72.8.

That dip in efficiency didn’t dissuade the Las Vegas Raiders from signing Drake to a two-year, $14.5 million contract before last season with $11 million guaranteed. Theoretically, the plan was to use Drake in conjunction with Josh Jacobs, but after totaling 34 touches over the season’s first three weeks, the former Cardinal would see double-digit opportunities just twice in his remaining nine games.

Drake’s season ended abruptly on Dec. 5 when he suffered a fractured right ankle. The injury required surgery, but there have been no reported complications, and the veteran is believed to be healing fine with the expectation he’ll be ready for camp. While there was some speculation about job security, the Raiders restructured Drake’s contract in March, so it’d be surprising not to see his name behind Jacobs on the depth chart.

The question is whether the new coaching staff, led by head coach Josh McDaniels, who was hired after a 10-year run as offensive coordinator with the New England Patriots, will find more opportunities for Drake to contribute. If you take McDaniels’ approach with the Pats as a guide, the answer appears to be yes, as that offense utilized backs in specialized roles for many years. In fact, in those 10 seasons on the job, McDaniels presided over just two 1,000-yard backs, the most recent coming in 2016.

With the Raiders declining Jacobs’ fifth-year option, it’s clear they don’t necessarily view him as part of their future, and it wouldn’t be surprising to see them use Jacobs more sparingly after watching his production decline each of his first three NFL seasons. The most logical stand in for Drake is probably James White, who was an effective passing-down back during McDaniels’ time in New England. While it has been a forgotten element of Drake’s game, remember that he caught 85 passes with the Dolphins in 2017-18 combined.

Based purely on his first season in Las Vegas, Drake shouldn’t be drafted. So many things have changed since then, however, you can’t read much into it. We know McDaniels likes to use multiple backs, and barring something unforeseen the top two will be Jacobs and Drake. There could even be a small role for rookie Zamir White, but it would come at the expense of Jacobs. While the shine of his days in Arizona is gone, Drake could be worth a late-round flier. 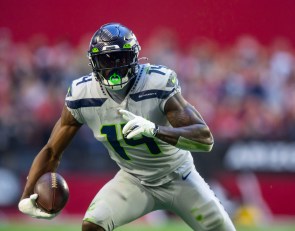