Heading into last season, Baltimore Ravens running back J.K. Dobbins (knee) was among the most popular breakout candidates in all of fantasy football, and for good reason. As a rookie the Ohio State product carried the ball 134 times for 805 yards (an eye-popping 6.0 yards per carry) and nine touchdowns, and that was with veteran Mark Ingram (now with the New Orleans Saints) soaking up 72 carries. Once atop the depth chart, Dobbins appeared poised for a big sophomore campaign.

That all changed on Aug. 28 during the team’s final preseason game when Dobbins suffered a torn ACL that would cost him the entirety of 2021. Just over a year will have passed when the 2022 regular season kicks off for Baltimore on Sunday, Sept. 11, against the New York Jets, and both the team and player are hopeful that Dobbins will be on the field. There have been no reported setbacks in his recovery, and he’s been vocal about wanting to play in the opener.

Whether he will, however, remains unclear. Dobbins is currently on the Physically Unable to Perform (PUP) list, alongside No. 2 back Gus Edwards (knee), who is coming off his own torn ACL, and it’s doubtful the team will push either player after relying on retreads like Devonta Freeman and Latavius Murray last year — both remain unsigned, which tells you how they’re viewed around the league.

Still, it feels likely that Dobbins will be ready sooner than later; even if he misses a game or two out of the gates, odds are the Ravens will activate him before finalizing their 53-man roster, since keeping him on the PUP would require the third-year pro to miss a minimum of four games. Head coach John Harbaugh recently suggested we could see Dobbins return to practice as soon as Monday, Aug. 8, which would allow for a look at him prior to most owners draft.

Once he’s cleared, Dobbins should serve as the lead back. That shouldn’t be confused with being a workhorse in the vein of the Indianapolis Colts’ Jonathan Taylor, though, as head coach John Harbaugh has long liked to mix and match his backs, and he has a very capable No. 2 in Edwards, whenever he returns. Further down the depth chart is a mix of veterans like Mike Davis and Corey Clement, and unproven players like Justice Hill (Achilles) and rookie Tyler Badie.

While Dobbins figures to get the highest usage, bear in mind he entered the NFL with questions about his ability as a receiver, and he did little to answer those as a rookie when he caught just 18 passes for 220 yards. That could mean a limited role for the former Buckeye on obvious passing downs, though Edwards has done even less as a pass catcher, so perhaps Dobbins will surprise in that regard. Ultimately, this offense just doesn’t incorporate its backs in the aerial game enough to move the need in that regard.

There’s less buzz around Dobbins this year than last, but that could work in your favor as he’s likely to be available later in drafts. As a high-end RB3 with some upside, he’d be worth pulling the trigger. Be patient with his early-season returns. 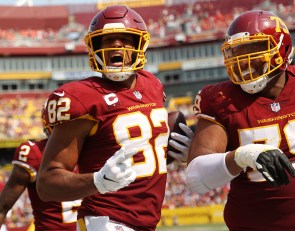