Kamara was arrested in Las Vegas the night of the Super Bowl in an alleged altercation in which four men were charged with the beating of man that resulted in significant injuries. One of the charges Kamara faces is felony battery. His case has been pushed back months, and his next court appearance is scheduled for early August when the Saints are at training camp.

Seeing as the NFL tends to wait to hand down punishment until courts cases play out, the case may well drag into 2023. We’ve seen instances in which that wasn’t the case, though, so it can’t be entirely dismissed for fantasy calculus this summer.

For our purposes, this comparison is primarily based upon Kamara not facing a league suspension during the 2022 season.

The case for and against Christian McCaffrey 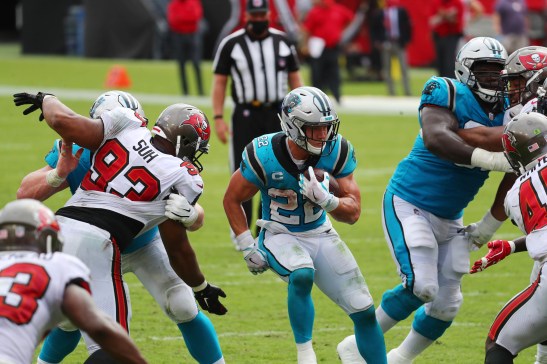 The case for and against Alvin Kamara

Neither player is without question marks heading into the 2022 season, but injury red flags are universal. If McCaffrey’s injuries were limited to one part of his body like an ankle or a shoulder, surgery could repair it and would win this head-to-head battle. When your injuries run from your shoulders to your feet, that is a problem.

Kamara saw his game change dramatically without Drew Brees last season, and his yards from scrimmage suffered. Although he hasn’t played every game in a season since his rookie year, he hasn’t missed a ton of time – just eight games in five years.

If both are healthy, you can’t go wrong with either one since each has displayed the ability to be explosive fantasy threats. But, at the end of the day, a decision must be based on the player that you’re convinced will be on the field week after week. At this point, Alvin Kamara would be the best bet to accomplish such a feat. McCaffrey is more explosive, but Kamara has a better health track record. The caveat here is if the league rules on his potential suspension prior to your draft, then all bets are off.