What to make of the Jaguars' new-look receiving corps?

What to make of the Jaguars' new-look receiving corps?

It’s not clear why some young signal-callers who struggle are handled with kid gloves — such as Chicago Bears quarterback Justin Fields — while others have their professional obituaries written (New York Jets’ Zach Wilson, anyone?). Without question, Jacksonville Jaguars quarterback Trevor Lawrence belongs in the first group as most lay the blame for an unrelentingly brutal rookie year squarely on the doorstep of deposed head coach Urban Meyer. Are they right? We’ll start to find out come Sept. 11.

Entering last year’s draft, terms like “can’t miss” and “generational talent” were used when describing Lawrence, who threw three TDs (and three INTs) in a Week 1 loss to the Houston Texans and didn’t throw for multiple scores in a game again until the season finale. He ended up passing for just 3,641 yards while leading the NFL in picks with 17. In addition to Meyer, the lack of talent around him was assigned some fault.

In an effort to help their young QB, the Jags invested big-time dollars in free-agent receivers Christian Kirk (77-982-5 with the Arizona Cardinals in 2021) and Zay Jones (47-546-1 with the Las Vegas Raiders), as well as tight end Evan Engram. We’ll see if it pays dividends.

Speaking of cashing out … sign up for The Huddle today to gain an award-winning edge on the competition! We have 26 years of experience online building fantasy football champions.

Over his first three seasons with the Cardinals, Kirk averaged 53 receptions, 640 yards, and four TDs per year. While that isn’t terrible production, it certainly wasn’t what Arizona was hoping for after taking him in the second round in 2018. With DeAndre Hopkins battling injuries last year, however, Kirk finally stepped up and led the Cardinals in receiving with 982 yards on 77 receptions.

Those aren’t monster numbers by any means, but it was enough to convince the Jags to make Kirk their new No. 1 receiver. Time will tell if it was money well spent, but the Jags needed to do something to give Lawrence an influx of talent, and Kirk showed he can at least be a reliable chain mover with the ability to break off big plays as well. 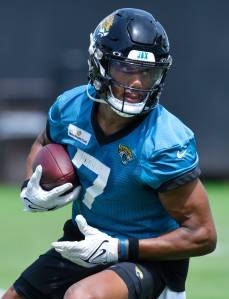 Jones’ story is reminiscent of Kirk’s. He, too, was a second-round pick who found limited success, though his original team (Buffalo Bills) cut bait on him midway through his third year. His time with the Raiders was largely undistinguished as well until the release of Henry Ruggs created an opportunity.

It took a while, but Jones eventually moved into that No. 2 role behind Hunter Renfrow, catching 43 balls over the team’s final eight games. He’s a possession target with limited speed, however, and he’s far from a lock to work ahead of Marvin Jones.

Shenault has 121 receptions for 1,219 yards in two NFL seasons. He’s also rushed for 132 yards. The Colorado product seems like a nice fit for a developing quarterback given his ability to work near the line of scrimmage and make plays in space, but he has struggled with drops and may be a bit redundant with running back Travis Etienne set to return from a foot injury that cost him all of 2021.

Jones (73-832-4) was the team’s leading receiver a season ago, but that was more about him being the last proven option standing than anything else. At 32, he’s on the downside of his career, and the deep speed that once defined him is gone. Jones looks primed to settle into a smaller role this year.

Although there’s expected to be a lot of competition for spots two through four on the depth chart — we didn’t even discuss Laquon Treadwell, who closed strong last year — the only name to know at this juncture is Kirk. He’s the one who nearly posted a 1,000-yard season with the Cards last year, and he’s the one who landed big money. Even then, Kirk profiles as a high-end WR4, which speaks to how unsettled (and uninspiring) this situation appears. There’s No. 3 potential if Lawrence makes strides.

Both Joneses and Shenault are viable fliers in deep setups and best-ball contests, but that’s only with the understanding they’re purely disposable roster depth.